The importance of the Valkyries in Norse mythology speaks volumes about Scandinavian society during the Viking era.

After growing up with the more subservient women of the Abrahamic scriptures, it’s refreshing to find religious texts that place women on an equal footing with men. In the case of the Valkyries, better than equal. They have power that is equivalent to the Christian St. Peter at the gates of Heaven; the power to choose who gains entry into Valhalla, the most coveted hall in the Norse afterlife.

This gender equality in their mythology was more or less mirrored in Norse society, where women had rights unheard of in the Christian world, where they were considered little more than the ‘property’ of their husband or father.

Viking era women had many rights 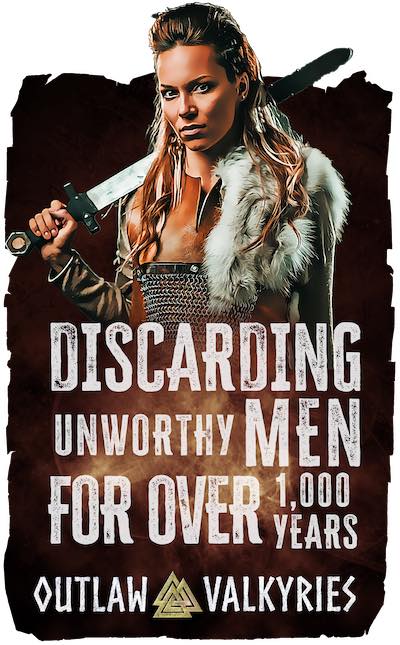 Women in Viking Age Scandinavia could own property, divorce their husbands and even reclaim their dowries if their marriages didn’t work out. This was reflected in their marriage contracts, which usually specified how family property was to be divided up in the event of a divorce. If their husband died, the wife would take over his role, running their farm or trading business.

Shieldmaidens and women in battle

Women also went on Viking raids with the men. Although most historical records from the Viking era, speak of the raiders as men, there are exceptions. Byzantine-era historian Johannes Skylitzes, recorded that both male and female Vikings fought a battle against the Bulgarians in A.D. 971.

12th. Century Danish historian Saxo Grammaticus, mentioned communities of “shieldmaidens” who dressed as warriors practiced sword skills and fought alongside the men. 300 Shieldmadens fought in the Battle of Brávellir, between the rulers of Denmark and Sweden in the mid-eighth century.
Some women became chieftains and even queens. One of the most elaborate graves uncovered in Scandinavia was that of the Oseberg “queen,” who died in A.D. 834 and was buried in a sumptuously decorated ship along with many valuable grave goods.

Although women did rise to be queens in the Christian world, they did not enjoy the same basic rights as those Viking era Norse women until the 20th. Century. It’s little wonder that Norse mythology has become increasingly popular as more is uncovered about these amazing people.

Who are the Valkyries?

So who are the Valkyries? Their name comes from the old Norse word “valkyrja” which translates to “chooser of the slain.” The Valkyries roam the battlefield, selecting the best warriors for Valhalla. Legend has it that they not only choose those worthy to enter Valhalla, but also those who will die in battle, a prerequisite to entering Valhalla.
The fact that Odin has entrusted the choice of warriors to the Valkyries demonstrates their importance to him. He needs the strongest warriors possible for Ragnarök, the final battle in which Odin himself is predicted to be slain, along with a number of other Norse gods.
The Valkyries do have some menial tasks, such as serving mead to the warriors they have chosen and looking after them, while they train in preparation for Ragnarök. Norse mythology also recognises the importance of love, and Valkyries often visit earth to engage in love with mortal men, particularly those who are heroes, and sometimes they even lived as the daughters of royalty. Their favourite animals are ravens, swans and horses.

Our knowledge of Valkyries comes from a number of books created in the 13th century which contain verses written during the Viking era. These include ‘the Poetic Edda,’ ‘the Prose Edda’, the Heimskringla and the Njáls saga. Valkyries also appear throughout the poetry of skalds, in a 14th-century charm, and in various runic inscriptions.

Today's Outlaw Valkyrie chooses who is worthy to have a place her life. She is proud, independent and strong. Her path is littered with the empty shells of unworthy men she's discarded. The narcissists, the abusers, the gaslighters; all condemned to spend their remaining days tormented by unfulfilled desire.

See the full range
← Prev: I do not lie quietly under the jackboot Next: Why are we Crazy about Outlaws and Vikings? →