My Mother, a real Braveheart

In another place, at another time she would have been a revolutionary, fighting and dying for a cause she believed in. But, unfortunately, fate cast my mother as a housewife in the 1960’s when women in Australia didn’t play much of a role in anything.

She lived in the shadow of my father, caring for a growing brood of children, while her husband furthered his career, achieved fame as one of the great legal minds in Australia and then ultimately ran off with his secretary. 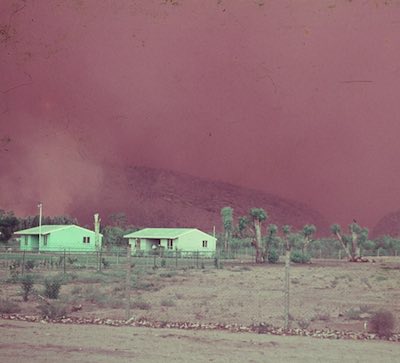 Dust storms like this were a part of life in Alice Springs in the 1960’s. People would have to rush out and bring the washing in or everything would be coated in red dust.

We all have bittersweet memories of my mother. She was a difficult person right up to her death. It’s not that she became any more cranky in her old age, she was just someone who would never run from a fight. My memories of her were of someone who just wouldn’t compromise. If she didn’t like you, she would tell you that up front. There was no pretense, no attempt to pretend or to tolerate you in order to keep the peace.
In fact, I don’t believe I’ve ever met anybody else quite like her in my sixty two years on this earth.

Perhaps it was a result of the difficult upbringing she had as a child, perhaps it was just raw bravery. She was brave enough to stand up for what she believed in at any opportunity she had.

A low tolerance for fools.

Because fate  had cast her in this role, the only battles my mother got to fight were with people who dared to cross her in suburban life. She had a very low tolerance for fools and things would very quickly escalate to a violent confrontation; I discovered this at the tender age of 16 when she broke a bottle of tomato sauce over my head. An arrogant driver also discovered this when he refused to move his car after parking in her driveway. To his horror, he found himself running for his life, chased by an enraged woman wielding a tomato picket she’d pulled out of the garden. A rude shop assistant also discovered this when she had to dodge a frozen chicken my mother launched at her.

When I reflect on my mother’s life and think about the single quality I remember about her, it would have to be bravery. She didn’t pick her targets, she basically fought with anybody who crossed her, regardless of the consequences. I’m sure my father, who was endowed with patience and diplomacy, necessary traits for a legal career, must have wrung his hands in frustration at times. The battles he faced at home probably played a big part in his late nights away from home and his ultimate abandonment of her and my sisters. Life at home was difficult for all of us and I left just as soon as I was able to.

It’s not that my mother was a bad person, she just could not hide her feelings. She couldn’t avoid a fight.

My mother’s trials started right from birth. Her mother died in childbirth, which was not uncommon in the1940’s. But in my mother’s case, they made sure she’d never forget it. The cause of death was listed as ‘The baby’s head was too big,’ and her father reminded her of this at every opportunity he had. He remarried to a woman who brought my mother up more as a servant than a daughter. Her childhood experience was so bad, she never wanted to see her stepmother or father again. I think we met them once our whole lives.

It was mother’s bravery that got her away from a life of servitude. She captured the heart of a young lawyer from a prominent family and together they fled their families who opposed the marriage, to the remote outback town of Alice Springs, where a new life awaited them. But life in a violent, remote frontier town in the 1950’s was far from idyllic for a young couple fleeing their problems. My father enjoyed a vibrant social life with fellow lawyers and he commanded their respect, after proving he was a talented lawyer. But for my mother, there was only isolation.

But no matter how bad things got, they could not be worse than the suffering she’d experienced as a child. She toughed it out for about twenty years, until my father finally left her and she never remarried. She spent her later years catching up on education denied her earlier in life. She enrolled in university and studied social welfare, then became involved in church organisations, usually helping derelicts and homeless people. She changed her name to that of her mother, Lee Morris, and welcomed death, believing she would at last be reunited with the mother she’d never known.
I know she’s now found the happiness denied her during her time on this earth.

← Prev: Why do I feel like I'm being conned? Next: I do not lie quietly under the jackboot →