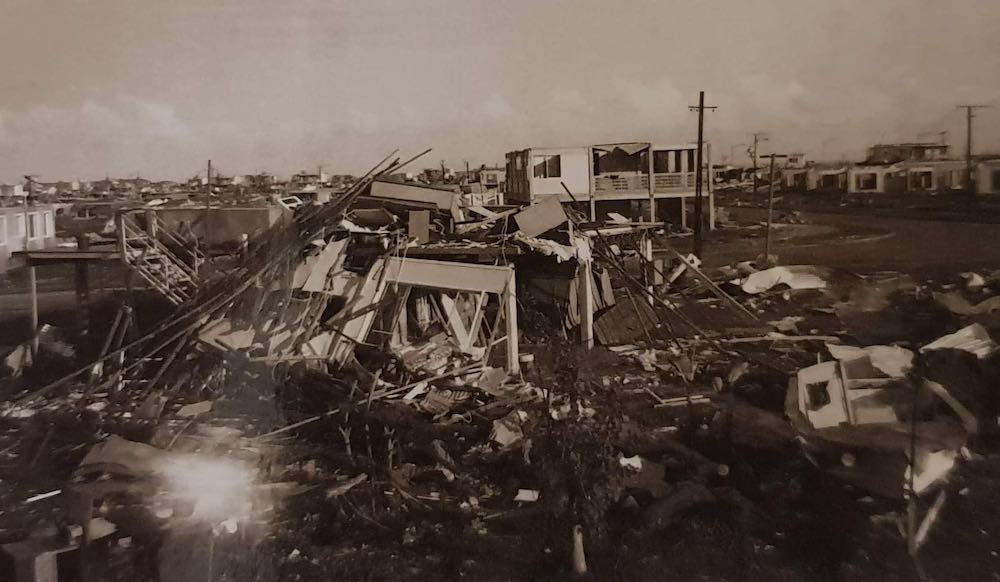 The ‘build-up’ that year had been toxic. Humidity got to 88% and the air was like soup, the sky heavy with angry clouds.

I was nine years old and a shy and watchful child, ever alert to any change in the atmosphere of the household.  Hysteria had been nibbling at the edges of our family for weeks.  Dad was bleary-eyed and unsteady on his feet.  Mum slunk through the house silent and brooding.  My sisters and I sniped at each other if we bothered to connect. My brothers were absent, whereabouts unknown.

The local aboriginal people knew there was danger coming; the ants were scurrying to higher ground, birds had taken flight and goannas and snakes were seen sunning themselves on the same rock platforms in an uneasy truce.  The rains began to fall but the tension in the house didn’t abate. 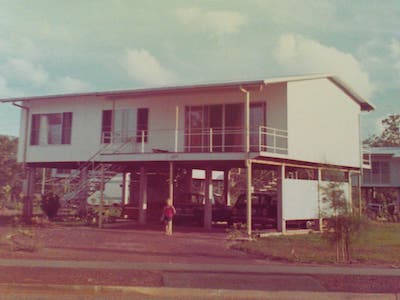 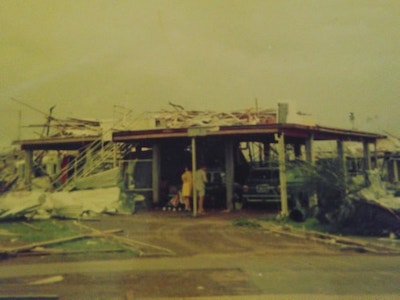 The header image and before and after photos of a typical Darwin ‘elevated’ house kindly supplied by Cyclone Tracy surviver, Rodney Gregg.

On the morning of Christmas Eve my mother was winding up. I hid in the bedroom I shared with my sister reading my Famous Five book. I was anxious and couldn’t concentrate. Nothing felt ‘jolly good’ or ‘super’. I gave up and lay looking at the sky through the window. It was coloured in violent shades of purple and green. Rain pounded against the glass and I could feel the house vibrating in the wind. Mum’s footsteps thumped up and down the hall and the staccato shrill of her voice bounced off the walls. My eldest brother, Michael, came home after staying out the whole night. Mum began to scream abuse. I hurried to the kitchen, skidding to a stop in the doorway as a tomato sauce bottle smashed down over his head. Mum stood frozen, the stem of the bottle still in her hand. Michael’s eyes widened and his mouth fell open. Tears and sauce streamed down his stunned face in a sticky mess, slivers of glass fell from his hair. He pushed past me and ran from the house.

Through the radio the sirens began to wail.

As the day wore on the winds picked up speed and the rain was relentless. My parents had friends over and were relaxing with Christmas drinks. I hung up my stocking and went to bed, relieved that the day was over. I tossed and turned listening to the clink of glass and the slur of conversation. My mother’s laughter sounded loud and duplicitous. Someone put the Beatle’s White Album on the stereo. In my head I sang along to ‘Oobladi, Ooblada’ and tuned out the barrage of noises inside and outside. I fell asleep and was woken around midnight by my father shaking me. ‘Get up. Hurry.’ His voice was urgent. He gripped my hand and we stumbled down the hallway. The banks of louvers were open and the wind threw us against the wall. I watched mystified as the louver glass bent into a complete U before shattering. Dad hauled me up from the floor and finally we reached the bathroom where my sisters and mother were piled together in that tiny space. We listened, terrified, for hours as things crashed and exploded all around. Eventually everything stopped. The silence was eerie. ‘Is it over?’ I asked hesitantly. ‘No’, my father said firmly. ‘It’s the eye.’ The winds began again at full throttle, roaring with fury, accompanied by the wild noises of destruction. I held my breath.

Daylight was dawning and the wind had finally died down. We huddled in stunned silence for what seemed an eternity. My father stood up. ‘I think it’s over,’ he said. Warily we began to unravel and I stood on tiptoes to look through the broken frame of the bathroom window. I shut my eyes tightly and opened them again. The lush garden my father had nurtured for so many years, with its tall majestic gums, tropical fruit trees and massive palms, was completely decimated. The ground was covered with broken trunks and branches. Beyond our back fence, our neighbour’s house had disappeared. A few lonely stilts paid homage to their former home. The yard was strewn with the remnants of their belongings; a hills hoist rested upturned like a spinning top, a dented fridge tottered on a mound of rubbish, their kitchen table lay askew like a wooden tantrum, legs in the air. Everywhere there were soggy piles of debris; concrete, glass, fibro, wood, clothes, toys cushions. I could see their Christmas tree lying stunted and dishevelled, a ragged clump of tinsel still clinging to a branch. I began to cry.

As the years passed, the intensity of the cyclone dissipated until it was a vague and distant memory. I blanked out the terror of that long, cold night. I buried the sounds and the smells and the things I’d seen. The carnage and the devastated terrain. The aftermath; those surreal dreamlike days where nothing made sense. I left behind the evacuation, the months of dislocation and the return to an apocalyptic landscape. My mind never wandered back to that time when my innocence, already cracked, was blown away like the seeds of a dandelion.

In my 30s, visiting Darwin again, I took my children to the museum and we went into the Cyclone Room. I was blasé but as the lights dimmed into blackness and the winds roared through the speakers, a tingling spread over my body. Every nerve ending in my skin was on fire. I began to hyperventilate and gasping for air I ran from the room leaving my bewildered children behind. Despite my efforts to block out the experience of Cyclone Tracy, every cell of my body held the memories of that fateful night. 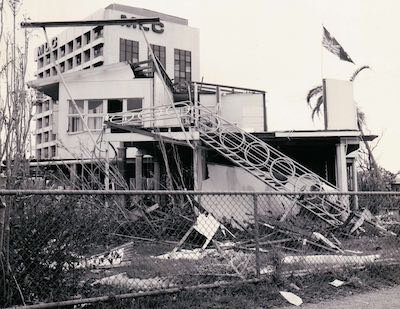 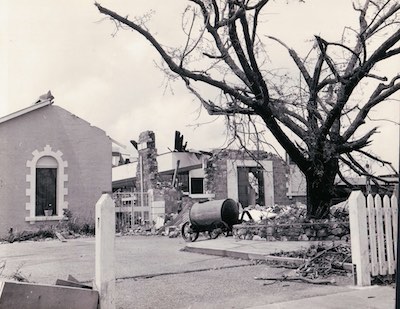 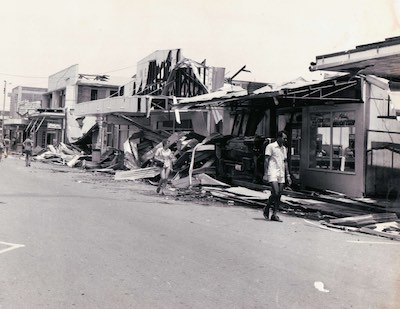 L-R The remains of a house in the Darwin city area, historical stone buildings partly destroyed in the city centre, destroyed shopfronts the main street of Darwin. photos by the late George Chalupka.

Footnote: Cyclone Tracy hit Darwin in the early hours of Christmas Day 1974. It only covered a small area but was very intense. The anemometer broke after recording wind gusts of 217km/hr so nobody really knows how intense the winds were. 71 people are known to have been killed but many more are believed to have lost their lives, as there were many people unaccounted for and unidentified bodies not included in the body count. Tracy destroyed 80 per cent of the city. In fact the city was so badly damaged that there was talk of not rebuilding it. Forty five years later, many survivors still suffer the psychological effects of this disaster. To many, Christmas is a grim reminder of that fateful night.

← Prev: Witches - the Healers who were Outlawed Next: When the Flying Doctor Didn't Come →