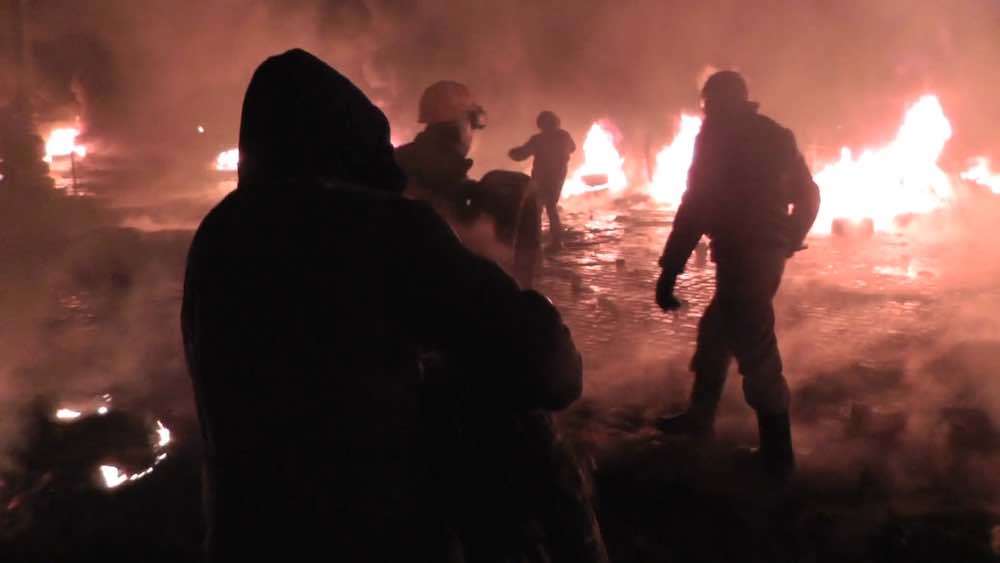 This is a work of fiction. Names, characters, businesses, places, events and incidents are either the products of the author’s imagination or used in a fictitious manner. Any resemblance to actual persons, living or dead, or actual events is purely coincidental.

“The Chinese are on their way.” Blurted out the bar owner. He had become very talkative with Kayla’s Dirty Harry 44 magnum next to his head and he knew without doubt that Kayla would use it. She’d done that just two days ago to one of his best clients and got away with it.

“They’re on their way. The entire Chinese army. They’re going to help liberate’ the country,” squealed the bar owner, he eyes darting around the room, sweat pouring from his brow. “Don’t you see? The fighting will never stop. This will be the new Iraq.”

“How could they justify that?” Asked Kayla. She looked at Pat, who was busy downing his second Vodka. “Surely that would create an international firestorm wouldn’t it? A foreign country taking one side in a civil war. I mean, it sounds more like an invasion than anything.”

“I don’t know much about international law,” said Pat, “but when have the Chinese ever obeyed it anyway?”
“But this is not some backwater country in the Himalayas, we have allies. Powerful allies.” Kayla released the man’s jacket and he fell to the floor. She raised the magnum and pointed it at him, then changed her mind as he scurried on his back like a cockroach turned upside down.

There’s something he’s not telling me, she thought. She looked back at Pat. “There’s got to be more to this story.”
She stalked the scurrying man until he jammed himself against the wall and placed a boot firmly on his crotch. She looked into his frightened weasel eyes and growled, “What aren’t telling me.”

“No, please, that’s all I know.” The man was whimpering now.

His accent, gave Kyla an idea. “You’re Russian?” She asked. The man nodded.

“How rude of me,” said Kayla, apologetically She reached out a hand, which he took warily. “I just remembered one of your customs. She guided him to a barstool, then clicked open her magazine and emptied the shells out onto the table in front of him. Then she picked up one round and held it up between her thumbing index finger, then put it in the chamber, spinning it a couple of times, before snapping it shut.

“Russian Roulette. You’re first.”
She turned the gun around and tried to hand it to the owner, who put his hands up in defiance, shaking his head vigorously.

“Of course, you need me to do it,” she turned the gun around, cocked it placed it next to his temple.

“Noooooooo!” Bowie shouted as she pulled the trigger. There was a metallic click. Kayla cocked the gun again.

The man was shaking violently. “The UN…” he stammered. Kayla lowered the gun.

What about the UN?”

“I heard something too,” said Bowie. Kayla glanced at him, then back at the man she was interrogating. “What about the UN?”

Kayla lowered the gun. “Why would they do that?” She asked looking at Pat, who looked blank. She turned to Bowie, “What did you hear?”

“I didn’t make sense of it at the time,” said Bowie, “but now it all fits together.” 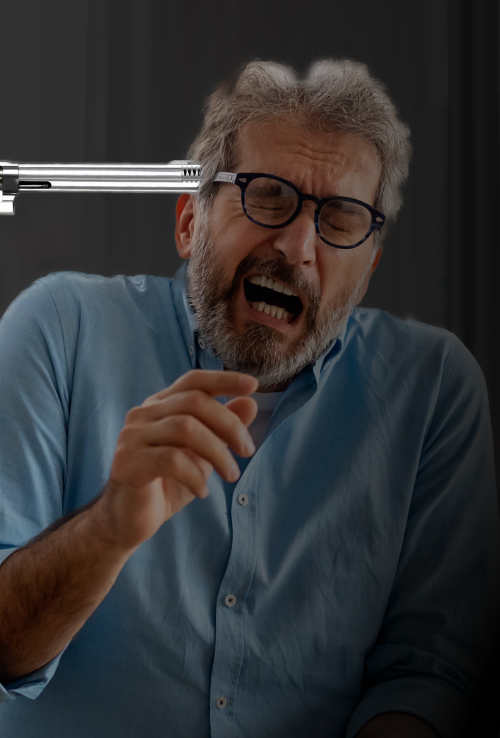 “Russian Roulette. You’re first.”
She turned the gun around and tried to hand it to the owner, who put his hands up in defiance, shaking his head vigorously.

“Somebody was talking about their suicide fighters in the UN forces. A writer, I think. They’ve got plants in the UN forces, Iranians who will attack the army as it moves in to take over the capital.

Kayla stared in disbelief. “So they’ll have no option but to fire on the UN peacekeepers, who are attacking them…”
“Exactly.”

She looked at Pat, who was on his feet. “We’ve got to go and warn them.”

“Pat looked at his watch,” I think it will be all over by now.”

Bowie groaned, “Can I stay and get some sleep?”

“You’re one of our witnesses,” she said. “Do we still need this one?”

Zoey held up her iPhone and began playing a video of the man’s revelation. She’d been standing behind Kayla the whole time recording the conversation. Kayla grinned, looking back at the blubbering mess standing before her, not just a bar owner, but a pimp to pedophiles. A trafficker of children. She paused for a minute, but then noticed a gold ring on his finger with a distinct looking diamond set in it. That would be nice for the collection, she thought. “Kill Him” said the snake in her head. She brought up the gun and fired. Click.

“Best out of three,” Kayla said, pulling the trigger again. This time the room filled with the roar of the .44 magnum and the Russian’s remains collapsed in a heap.

Kayla bent down to retrieve the ring. She would need a chain or leather thread to hang the rings around her neck. She promised herself there would be many more to come before they were through. The snake in her head hissed in approval.

Pat grabbed the vodka bottle from the bar and began walking out. He glanced at the mess on the floor and shook his head.

“And you never killed anybody?” said Kayla sarcastically.

“You really should see a shrink.”

“Yes, I should. I haven’t got one of those in my collection yet.”

Pat groaned and shook his head.

Kayla trudged on in silence. She felt an emptiness she hadn’t known since they murdered Billie. Shit, she thought, why Noah? She’d really grown to love that naive little redneck kid like a little brother.

“Wait,” yelled Bowie. Pat turned back to him.“This guy might have a car.” Bowie looked down at the dead Russian.

Pat walked back and bent over the corpse, looking through the pockets. “Aha,” he said, producing a set of keys on a Tesla ring.

“It pays to have a privileged white mind” said Kayla with a grin, looking at Bowie. “I never would have thought of something that easy.”

Within a few minutes Pat was driving them silently down the street in a beautiful new Tesla Model S. Kayla sat in the front seat next to him, his automatic rifle over her knees and the Dirty Harry gun now fully loaded in her hand ready.

“I don’t know how far we’re going to get,” said Pat warily. “There are going to be a lot of debris around from the fighting.”

“Do you know which way to go?” Asked Kayla

“I guess if we head to capital, we’ll find the army sooner or later.”

Kayla clicked on the radio and the system searched for a signal.

“You never know, it’s worth a try.”
After some crackling, the voice of a news broadcaster came through clearly.

“World leaders have expressed their horror at reports of the wide scale massacre of civilians in Washington DC by rebel forces, as they advance on the nation’s capital. “

“What?” Said Bowie from the back seat. Kayla turned and hushed him. Why are they killing people?, she wondered.

“United Nations peacekeepers attempting to protect the civilians were also caught up in the firing and the entire force is believed to have been killed. The civilian dead number in their thousands, but details are unclear on the circumstances surrounding the massacre. Chinese President, Xi Jinping, has committed to provide a large peace keeping force, which is believed to be currently on route to the US. NATO leaders are meeting tomorrow to discuss the mobilisation of troops to help quell this unprecedented violence.”

As the broadcast finished, there was silence in the car. Then Pat spoke first. “That’s impossible. Why would civilians be out there anyway? And why would they shoot on them?”

“That’s what the report said. Be honest Pat, you said many of these guys have lost family in the camps.”

“No way,” said Pat. “Not civilians. Most of us are Christians.”

Kayla studied him silently. This was a frightening development. Maybe they were going to go on a bloodbath to avenge their relatives who were imprisoned by the government. She shuddered. “Maybe we shouldn’t go that way,”
“I thought we were going to warn them.” replied Pat.
“It sounds as if we’re too late.”

“What’s that up ahead?” Asked Zoey from the back of the car. Kayla turned to look out of the windscreen.
“I’ll be darned,” said Pat. Kayla could see people. A crowd, walking down the street toward them. There was something odd about them. They weren’t frightened like everybody other civilian she’d seen. They walked together, like soldiers marching, looking straight ahead, straight at their car. 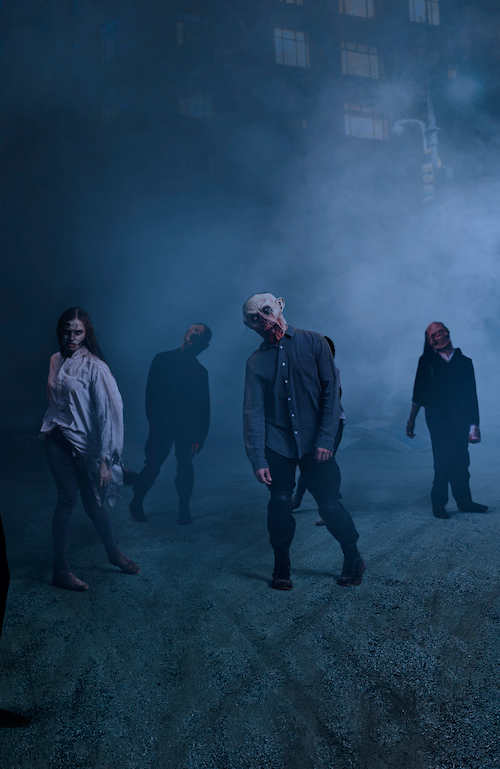 “There’s the reason for the massacres,” said Bowie in a detached voice.

“What the hell is wrong with them?” Asked Kayla.

“The third Covid Vaccine,” said Bowie. It contains a microchip. They can activate them whenever they choose to.”

Pat hit the brakes and they watched the approaching people, expecting them to stop or move aside, but instead, as Kayla watched in disbelief, they all began running toward the car.

“Oh shit,” said Pat, slipping the car into reverse. He backed it around to the side of the street and began to turn the other way, but the people had reached the car and mayhem broke out. Oblivious to any pain, they began throwing themselves at the Tesla, slamming their heads on the windows, leaping on to the hood. Pat inched the car forward.

There was a loud smash and a rear window exploded as somebody hit it with a rock. Zoey screamed and Pat planted his foot down. The front of the car rose up as it went over a body, followed by the rear.

“Oh shit, oh shit,” muttered Pat, as they sped away from the crowd.

“There’s the reason for the massacres,” said Bowie in a detached voice.

“What the hell is wrong with them?” Asked Kayla.

“The third Covid Vaccine,” said Bowie. It contains a microchip. They can activate them whenever they choose to.”

Pat nosed the Tesla onto the freeway and headed south, away from Washington. “We’d better get bunkered down somewhere,” he said gravely. “Because there’s one hell of a war coming.”

Back to the ‘Writers of the Storm’ Homepage

Read Other Chapters of ‘Writers of the Storm’